Skip to content
I got to spend some time at ABQ Health Partners Bariatrics yesterday for my 1-month surgical follow-up. My Nurse Practioner, Patricia, laughed at the “oops, I ate bread” story, expressed concern that my blood pressure was too low, and congratulated me on my continued weight loss. She then warned me that a stall might be coming as my diet changed, and then approved me to move to the “regular food” diet – ready to eat any food I wanted, provided I abided by the rules we have been getting hammered into us for the past several weeks. You know: protein first, no liquid before or after meals, less than 20 grams of carbohydrates with any meal in a day.
With that, she released me into the wild. Total time in the office: 19 minutes.
I stood blinking in the sunlight outside the office, my head swimming at how quickly everything took place, and then realized that I was, finally, able to start eating like a normal person again. Admittedly, a normal person who eats 4-ounce meals that take 30 minutes to ingest, but, you know, mostly normal.
So…now what?
We briefly discussed going out to a restaurant to celebrate, but after the Panera disaster on Saturday I was not really feelin’ it. Other than steakhouses and seafood joints, I could not think of any restaurants who specialized in high-protein, low carbohydrate fare, so I decided to just skip it. Instead, we headed to the grocery store.
Where I bought greek yogurt. With fruit in it.
I remember 6 weeks ago, Lor’s absolute delight in wandering the aisles of Trader Joe’s and buying all these items she had been missing, and felt kind of jealous. I felt no sense of joy, really. No overwhelming relief that the worst was past and now I could start enjoying my new diet. Mainly, I felt panic. How was I going to handle 60 grams of protein a day without using protein shakes? I felt like someone had taken the training wheels off my dietary bicycle, and I was now teetering precariously as I rolled down the street.
So, instead of a celebratory meal, I had a P3 instead: 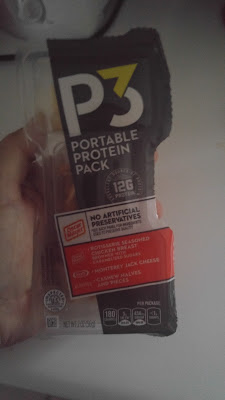 12 grams of protein, and roasted meats, hard cheese,and nuts – all things that have been denied me for weeks now. That settled me down the way a stiff drink used to. Heck, eat three of these a day, with two yogurts for snacks, and I am already upwards of 50 grams of protein, right? Nothing to this 60 grams a day thing!
Then, for dinner, came Lor’s secret weapon. It turns out she had been planning for weeks to make us a pizza to celebrate my return to real food. Not just any kind of pizza, though – a pizza whose crust was made out of baked ground chicken.
Yeah, let that settle in for a bit. It is a real thing: Chicken Crust Pizza.
Except, instead of going all “veggie friendly”, Lor piled it with beef marinara, Canadian bacon, regular bacon, and fresh mozzarella. A single slice of this heavenly marvel came in at a whopping 23 Protein, with only 4 Carbs. The best way I can describe the taste of the crust is a deep dish pizza crust cooked in an oven at the same time as a roasting chicken. We (barely) managed a slice each. (Mind you, each slice is about half the size of a standard slice of pizza. So, yeah, pretty nutrient-dense.)
So, yeah, maybe this “real food” thing will work out after all.
Now I Am Ready To Go Back To The Grocery Store,
– Hawkwind